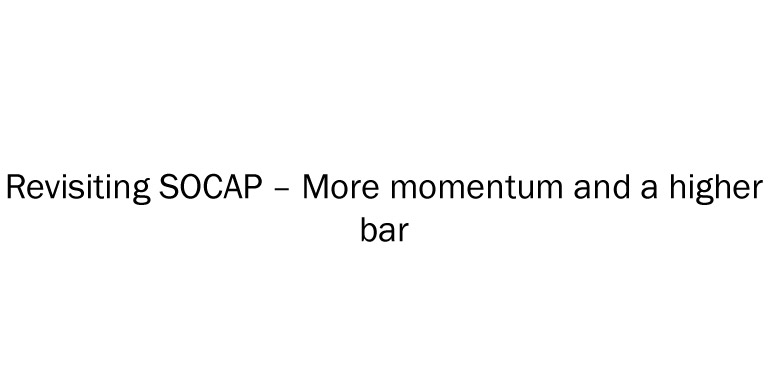 After spending five years away from the impact investing arena, I recently rejoined Intellecap, an advisory firm and investment bank based in India, to again work on building the ecosystem for impact entrepreneurs. As part of my re-entry, I attended SOCAP 2016 last week to see how the conversation and the players have evolved. By way of reference, I last attended SOCAP in 2010. Below I share several observations about the shifting impact investment landscape that emerged after attending a series of sessions and meetings at this year’s conference.

New big name entrants have come out to play

Five or six years ago, the big names in this space — mostly philanthropic and clearly social minded organizations like Acumen Fund, Rockefeller Foundation, Omidyar Network, Bill and Melinda Gates Foundation — all got ‘big ticket’ spots on the SOCAP stage. But, the last several years have seen an influx of new players including large mainstream financial firms as well as increasing involvement from the US government. By way of example, Bain Capital, which launched a Double Impact Fund in 2015, Blackrock which launched a Social Impact Fund last year, JP Morgan Chase and Morgan Stanley now actively play a role in the space and how it is evolving. Government agencies like USAID also have a clearer focus on innovation and ecosystem building in the developing world, having taken on a social innovation mandate several years ago (including by hosting SOCAP@State in 2011), and continuing to focus on increasing impact entrepreneurship throughout the world since.  These new entrants increase visibility and capital flowing into the impact investing sphere. Hopefully their risk-taking appetite will allow them to help alleviate some of the challenges that emerged in the conversation last week, which are cited below.

Despite the new players and new funding sources, the pioneer gap persists and that came through clearly in several SOCAP sessions. Social entrepreneurs in several sessions bemoaned the lack of investors who are truly willing to take risks by being the first investor, by investing in pre-revenue businesses, and by investing in amounts smaller than $250,000 (which can be time-intensive and costly). The conversation back in 2010 focused on a lack of investable enterprises, and the conversation today isn’t much different—we just have a more sophisticated understanding of why investors say that, and how we need to solve for this. Much has been said about the pioneer gap, particularly by organizations like ANDE, Village Capital and Acumen, and much as been done, including Intellecap’s own efforts at launching angel investing networks in India and East Africa – but there is more to be done, and the conversation about how to solve for this remains quite active.

There is a continuing role for philanthropic capital and technical assistance

As a result of the persistent pioneer gap, there is a continuing role for philanthropic capital and technical assistance, which can fill the gap in a strategic way. Speakers in the Thursday session about the Catalyst Fund, a new initiative to catalyze inclusive financial technology enterprises, have created an approach that they hope will fill the gap and catalyze new enterprise growth. The fund involves four types of players: philanthropic capital, investors, technical assistance providers, and enterprises.

In the case study showcased at SOCAP, JP Morgan Chase has provided grant capital of around $100,000 to the Kenyan enterprise PayGo Energy, and Bankable Frontier Associates has provided technical assistance in the form of a interim Chief Technology Officer. Investors including Omidyar Network, Gray Ghost Ventures, Accion Venture Lab, and Quona Capital are part of the Catalyst Fund and are ready and waiting when an enterprise becomes investor-ready. What appears to work well in this approach is the inclusion of capital as well as technical assistance to bridge the pioneer gap—with consultants able to fill talent gaps and investors waiting in the wings once an enterprise has started to generate revenue.

Speakers emphasized that grant capital within the Catalyst Fund has a key role in catalyzing markets, investing in needed infrastructure and de-risking enterprises, and that it shouldn’t be looked down upon or be seen as market distorting. We need to see more like-minded collaborations in this vein.

It’s not just about money. The talent gap is stark, too

The pioneer gap is not just about a lack of risk-taking investors, however. Several different sessions mentioned that the biggest challenge facing emerging enterprises in developing markets today is a lack of talent. In developing markets, it’s not hard to come across amazing entrepreneurs or teams of founding entrepreneurs, but when it comes time to operationalize or scale a business model, the talent is often not there. There is a need to invest in talent, bring talent to markets where there are gaps and provide technical assistance alongside investment capital. Without a focus on talent development and acquisition, many enterprises will flounder, lacking the ability to truly operationalize their idea.

Five or ten years ago, the bar for becoming an impact investor was fairly low. If you knew the financial side of the equation or if you knew the social side and had worked on the ground with enterprises, you could get a foot in the door. The bar has risen. Today, if you want to enter the impact investing space, it is ideal to have experience across sectors, from finance to non-profit to government, and candidates should be particularly strong on the numbers side of the equation. As Dave Chen, Principle and Chairman of Equilibrium, stated in a panel directed at first-time impact fund managers, ‘You’ve got to know your way around a spreadsheet; you have to be able to quantify social and environmental benefits return-wise; you have to know not only the right words, but how they are applied and how they fit into the space.’ Judging from the conference content, there is swelling interest from many corners in getting in on the investment side. Intellecap ran an impact fund manager training on the last day of the conference, and Jack Knellinger, Co-Founder of Capria joined us. Capria is the first global business accelerator for impact fund managers, and it is part of a cadre of other organizations, including ANDE and GIIN, who are trying to accelerate the ecosystem by training talented fund managers around the world.

On the one hand, the conversation hasn’t changed that much. Many of the same players still exist and we’re still facing many of the same challenges. But, momentum has grown far greater (SOCAP was attended by 2,500 attendees this year, compared to around 1,000 6 years ago), there are new mainstream entrants to the conversation, and the dialogue has grown in sophistication. The bar has been raised for fund managers, and for the sector as a whole, which can only be a good thing in the long run.

Lindsay Clinton is Director US, Intellecap and is based in New York.