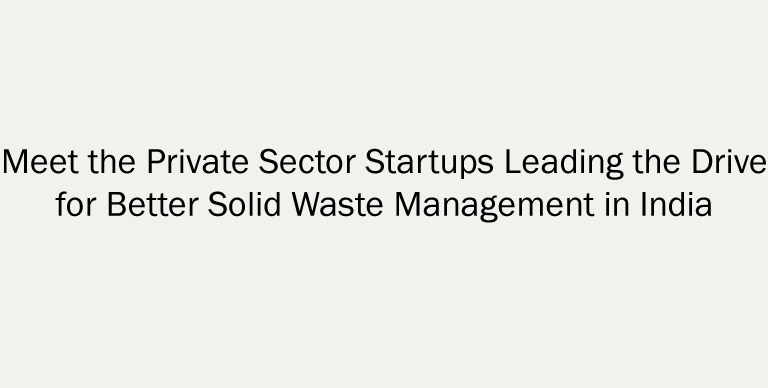 As the world’s population continues to increase beyond 7.4 billion, the challenge of efficiently managing the resultant municipal solid waste (MSW) continues to grow.

In simple words, municipal solid waste (MSW) refers to waste in the form of organic material, paper, plastic, glass, metals, and other refuse collected by municipal authorities from the public (homes, offices, institutions, and commercial establishments). According to the World Bank, in 2009–2010, 1.3 billion tons of MSW was generated globally. This translates into an alarming 0.5-0.6 kg of waste per capita per day. This rate is much higher for urban areas, at around 1.2 kg per capita per day[1].

Consequently, the challenge of managing MSW is the most acute in urban agglomerates of the world. The scale of the challenge can be gauged from the fact the more than half of the world’s population today is urban, and the share is expected to grow as people migrate from rural to urban centers, especially across the developing world.

Improper disposal of MSW has a wide range of adverse implications, including climate change and urban water crisis. 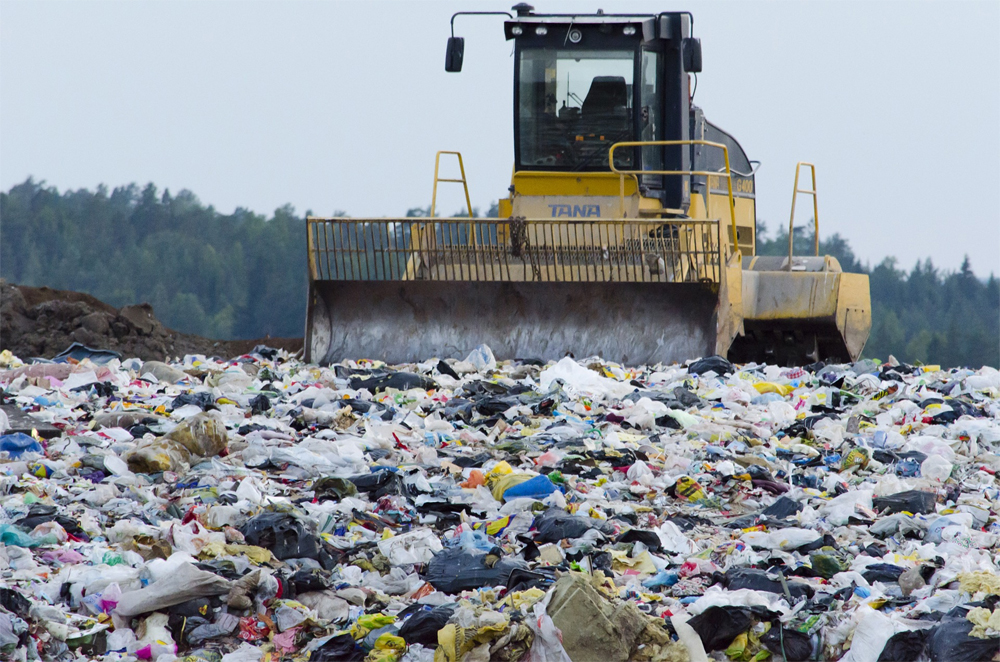 Uncollected waste and indiscriminate dumping often clogs wastewater drains and pollutes the available surface and ground water. In addition, blocked drains lead to urban flooding and stagnation of water, providing a congenial environment for the propagation of water-borne diseases. In developing countries, the practice of segregating waste into organic waste and inorganic waste is often not followed, and post-collection, MSW is typically transported to landfills and dumping yards. Anaerobic decomposition of mixed waste in dumping yards results in emission of large amounts of methane. The global warming potential of methane is 23 times as the same amount of carbon dioxide.[2]

The per capita urban waste generation in India is around 0.5-0.6 kgs per day, which implies that the total MSW generated in urban India could be as much as 68.8 million tons every year[3].

Given the scale, traditional approaches to MSW need to be refined to meet the present context. 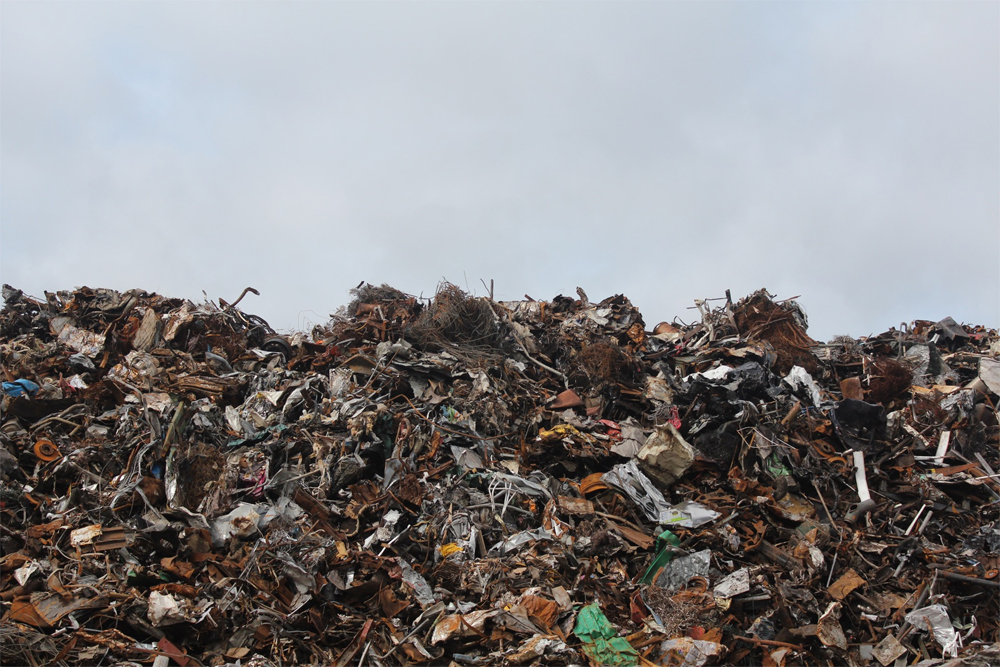 Considering rapid urbanization in India, the Central Pollution Control Board (CPCB) has observed that Urban Local Bodies (ULBs) have not been able to upgrade or scale up their facilities to sustain the increasing amounts of MSW generated. Consequently, waste is often seen lying along streets, remote areas and river beds[4].

The health hazards accompanying waste aggregation and related problems such as flooding during monsoon and contamination of drinking water significantly compromise the standard of living of low-income urban communities. In addition to creating the problems associated with MSW, such waste disposal practices limit the outreach of formal waste collection mechanisms.

According to the CPCB, as much as 30 % of the total urban MSW generated in India is not collected, and less than 15 % of the MSW generated is processed or treated. There are numerous issues plaguing efficient waste management in India, ranging from lack of proper planning on the part of authorities and poor operation of collection and treatment mechanisms to low awareness among citizens.

A critical first step towards efficient waste management would be to segregate household waste into organic and inorganic components at source, and ensure that each component is handled appropriately. While there have been numerous attempts from both ULBs and private stakeholders to educate citizens about the importance of segregation at source, such attempts are typically limited to a few wards, and hence, their impact is minimal.

The more commonly followed process involves the segregation of mixed waste at a secondary site by waste pickers. However, this approach is time-consuming and tedious. It also exposes waste-pickers to direct contact and injury from potentially hazardous items. Segregated waste is often mixed again at the time of transportation and disposal.

Improper management of waste is often observed across the waste disposal chain. For example, even after the accumulated waste reaches dumping yards, it is not properly managed. There are definitely better alternate modes for MSW disposal which are slowly gaining popularity. Composting, biogas, and pelletization are some of these methods. Waste-to-energy plants have also been proposed.

In recent years, a number of Private Sector Enterprises have designed innovative interventions to address challenges related to Solid Waste Management in India. 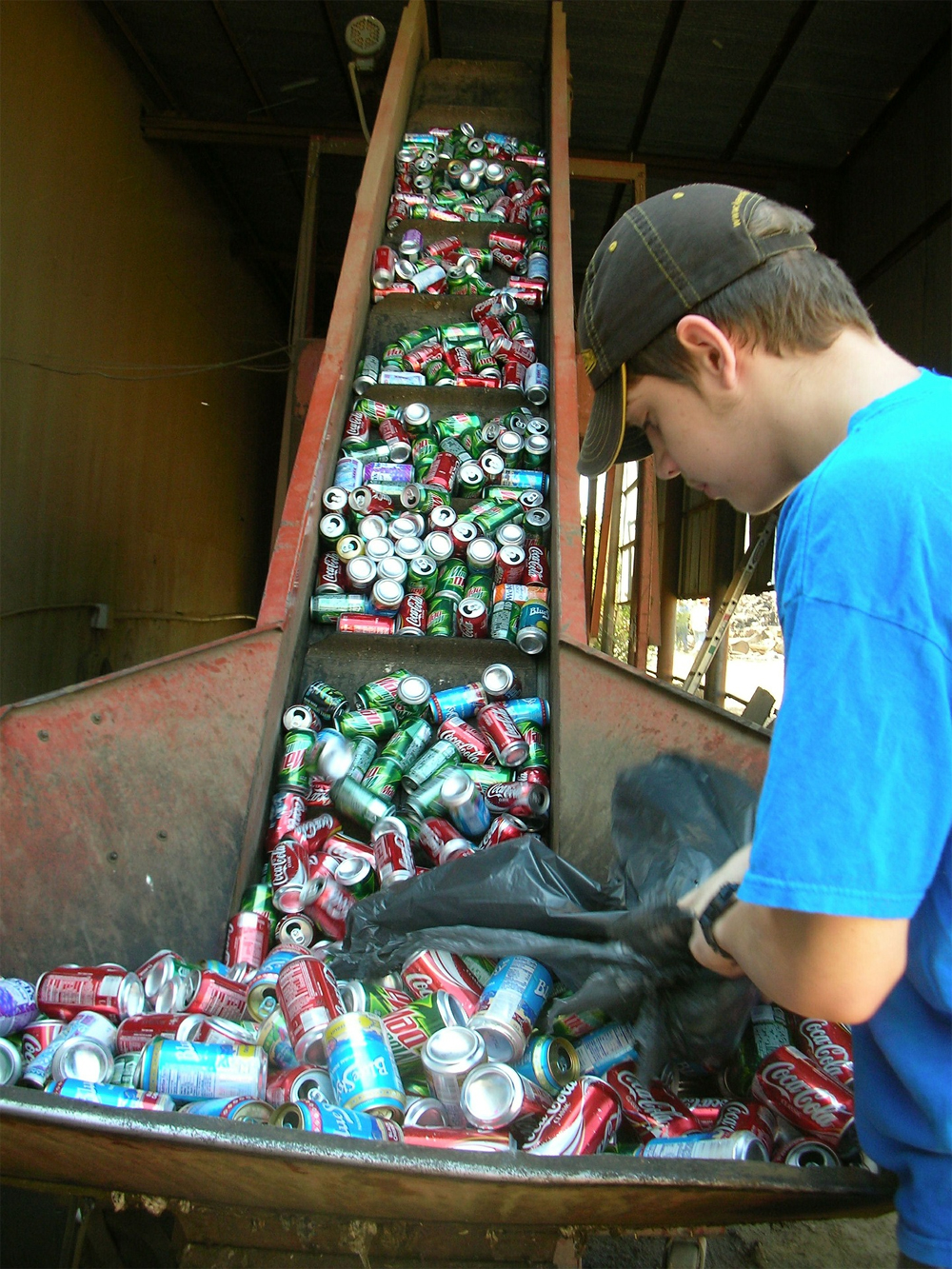 Initiatives and interventions for Solid Waste Management (SWM) require significant investment in terms of money, time, and effort. Hence, people, almost perennially, saw undertaking initiatives in this space to be the Government’s responsibility. However, in recent years, a number of private sector enterprises have observed a business opportunity in the various challenges related to SWM.

Besides creating a positive environmental impact, these enterprises also target socio-economic impact by partnering with the low-income population involved in the SWM value chain. A number of these enterprises, for example, have partnered with waste-pickers or rag-pickers. Waste-pickers arguably receive the lowest wages in the SWM value chain, while also facing exposure to potentially hazardous waste. While working with the grassroots, enterprises in this space have tailored their business models to streamline the collection process and create both environmental and socio-economic impact.

Below, this article highlights few of the very innovative private sector initiatives which are making a difference with respect to SWM in India:

Protoprint is an enterprise based in Pune which partners with waste pickers to convert plastic waste into filaments for 3D printing. 3D printing is an additive manufacturing technique in which one can create, or “print”, objects layer by layer using raw material powder or filament as feedstock. Although 3D printing is still at the nascent stage in India, it has appeal as the technology of the future, and is increasingly seeing use to manufacture intricate geometries which are difficult to cast.

Founded in 2013 by Siddhant Pai, Protoprint has partnered with SWaCH (Solid Waste Collection and Handling, or SWaCH Seva Sahakari Sanstha Maryadit), which is a wholly-owned cooperative of self-employed waste pickers from Pune who provide front-end waste management services to the citizens of Pune[5]. Protoprint has set up ‘Filament Labs’ at dumpsites. They process High-Density Polythene (HDPE), such as shampoo and detergent bottles. At the Filament Lab, the bottles are converted into flakes which are then melted and extruded into HDPE filaments[6].

Waste plastic costs less than US$0.30 (₹20) per kg., whereas one can sell 3D filament for more than US$15.27 (₹1,000) per kg. This significant value added has the potential of making the setup commercially viable in a matter of months. While having a strong business case, the intervention also provides an opportunity for waste pickers to become micro-entrepreneurs. Once they have perfected the filament manufacturing process, the waste pickers can scale up the concept and take it to multiple cities by partnering with other waste-picker collectives and NGOs. 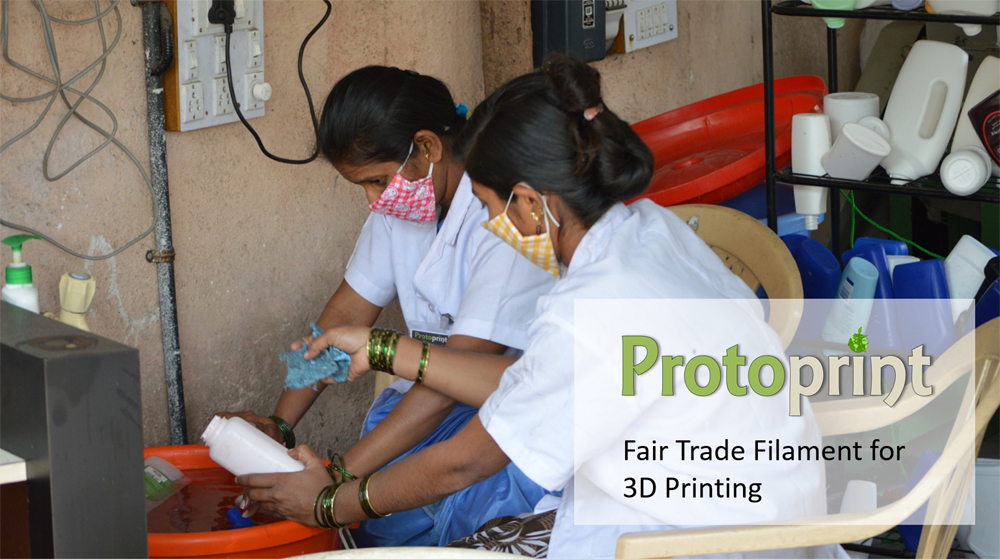 GPS Renewables is a Bangalore enterprise that focusses on setting up compact waste-to-energy plants that convert bio-degradable kitchen waste into biogas, usable for cooking.

The idea of using kitchen and other organic waste to produce biogas has been around in India for a long time. However,  installations have traditionally not taken off because of poor awareness and lackluster monitoring. Additionally, such setups typically require a steady inflow of bio-degradable waste to be sustainable and produce an output in usable quantities. If we overcome these hurdles, biogas plants hold immense potential to effectively manage bio-degradable waste in urban areas, especially in restaurants, community kitchens, housing societies, and other areas with a high volume of waste generation and aggregation.

It is with this context that Mainak Chakraborty and Sreekrishna Sankar set up GPS Renewables in 2011. They developed a prototype of a modular biogas system, christened BioUrja. BioUrja is a compact plug-and-play system that users can install anywhere with minimal civil work, and is perfect for bulk generators of bio-degradable waste.

GPS Renewables ran a pilot point for a year before setting up a system at Akshay Patra Foundation, a non-profit organization that supplies mid-day meals to schools. The system has been operational since 2013 and processes roughly 600 kgs. of kitchen waste every day. This represents mitigation of more than 300 tons of carbon dioxide[7]. Subsequently, GPS Renewables has installed similar systems at various other locations such as hotels, corporate offices, and universities.

The company has been profitable since inception, receiving recognition from the World Wildlife Fund and the Sankalp Forum, among others. It has expanded beyond India into Bangladesh, Malaysia, and Sri Lanka. It plans to foray into gas bottling in the future. 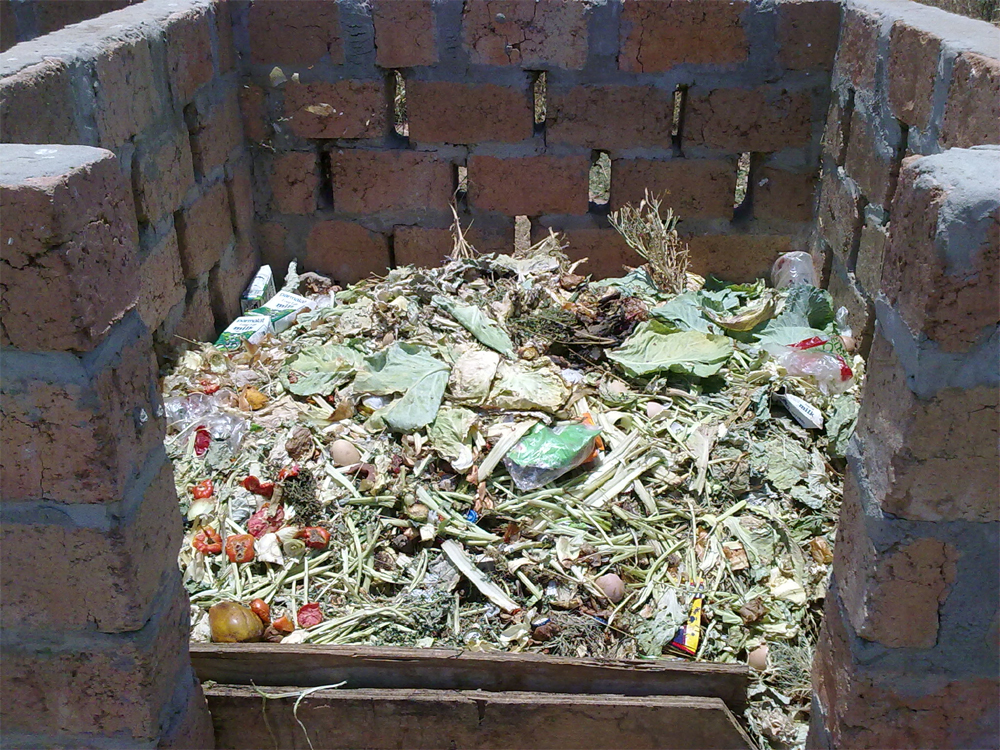 The nature of solid waste generated in urban areas is changing with changing time and technology. While paper and plastic waste continues to grow, people are also discarding an increasing number of laptops and mobile phones. Such products contain lead and other hazardous chemicals, which pose an additional threat to those handling it unscientifically.

An ‘extended producer responsibility’ (EPR) rule mandates electrical and electronic equipment manufacturers manage it after the end of its life. However, the success of enforcing this concept needs testing. Consequently, India generates more than 13 lakh metric tons of e-waste every year, recycling less than 2 % of it.[8]

Akshat Ghiya and Aamir Jariwala started the e-waste recycling business called Karma Recycling in 2013. Karma Recycling buys old electronic devices from individuals and refurbishes or recycles them according to their condition.

With increasing income and rising aspirations, there exists a large market for pre-owned refurbished electronics devices. However, this market is not apparent to individuals, who tend to retain their old and unused electronic devices. Karma recycling is changing this status quo in two ways. Firstly, it has tied up with physical stores across the country where individuals can sell off their unused gadgets. Secondly, it operates an online platform where individuals can get a quote for the device they need to sell. They can arrange the logistics thereafter for the transaction.

The company has purchased over 2 lakh devices so far[9]. Karma Recycling has caught the eye of investors and has successfully raised seed and Series A funding for their venture.

Technology for Change: I Got Garbage, Bangalore

Bangalore, one of the key urban agglomerations in India, generates more than 4,000 metric tons of solid waste daily. Around 90 % of this waste ends up in landfills. The government spends more than US$68 million (₹450 crores) only transporting this waste.

On the other hand, informal workers divert around 600-800 metric tons of recyclable waste daily from these landfills. I Got Garbage (IGG), a Mindtree Consulting initiative, saw these rag pickers as a critical resource for SWM in Bangalore. IGG envisioned them as micro-entrepreneurs who could create employment if waste collection and recycling value chains became more predictable.

Given this context, IGG created an IT-based cloud platform. It connects rag-pickers to potential sources of MSW, and to potential scrap buyers interested in procuring the collected waste. Besides providing access to the platform, IGG has recently also started training rag-pickers to help them operate more efficiently. The average monthly incomes of the partner rag-pickers have almost doubled from US$73 (₹4,828), to US$134 (₹8,834).[10]

Currently, IGG works with more than 8,000 rag pickers directly, and has recycled more than 5,000 tons of MSW.[11] The use of technology in its value chain has helped IGG streamline operations, and the organization is looking to scale in cities outside Bangalore now. 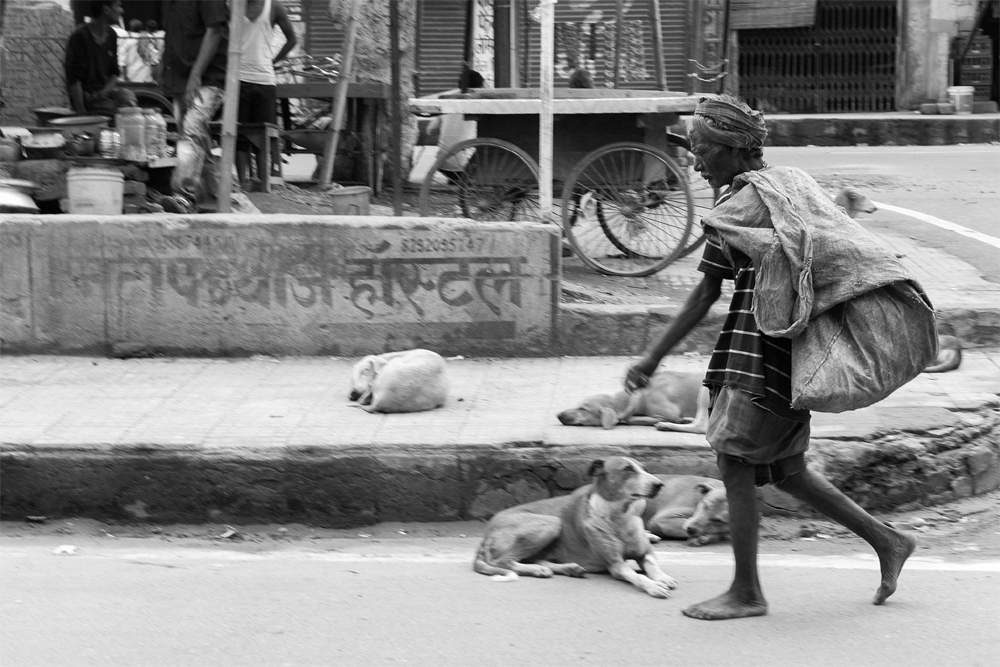 (The Asian Cities Climate Change Resilience Network (ACCCRN) is supported by the Rockefeller Foundation. It now reaches more than 50 cities in Bangladesh, India, Indonesia, the Philippines, Thailand, and Vietnam. It also helps these cities improve capacity to prepare for, withstand, and recover from the impacts of climate change. Intellecap is supporting these private-sector interventions and mapping pilot project results across various sectors. This article is a part of a series on Intellecap’s learnings while working with enterprises in the Sanitation sector.)

About the authors: Vineeth Menon and Amar Gokhale are Managers, while Shreejit Borthakur is a Senior Associate, at Intellecap. Intellecap is a pioneering global advisory firm providing innovative business solutions. It helps build and scale profitable and sustainable enterprises, dedicated to social and environmental change, across three continents.

To learn more about various initiatives tackling Municipal Solid Waste, and how you can contribute, visit ACCCRN’s website.