Impact Investing 2.0 – A journey from movement to mainstream? 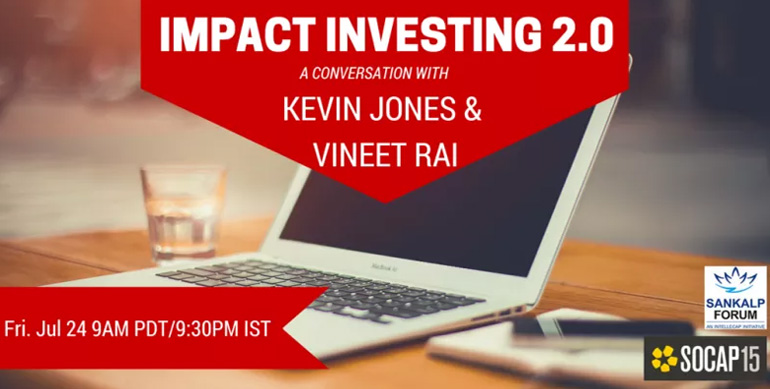 Impact Investing is at a critical moment in its short history – increased capital flows, positive returns, and an increased interest from traditional investors are blurring boundaries between what is mainstream and what is impact investing. Kevin Jones, Founder and Convener of Social Capital Markets (SOCAP), and Vineet Rai, Founder of one of the oldest and largest impact investing funds globally, Aavishkaar, discussed the relevance of this distinction and the future of impact investing in a webinar hosted jointly by Intellecap’s Sankalp Forum and SOCAP on 24 July, 2015. Moderated by Kanika Kumar, Manager of Sankalp Forum Africa, the webinar had over 100 participants from across the world. This blogpost highlights key take-aways from the discussion.

Last month, the Global Impact Investing Network (GIIN) launched its regional industry report The Landscape for Impact Investing in East Africa, the first comprehensive analysis of the impact investing sector in Kenya, Uganda, Tanzania, Ethiopia, and Rwanda. The report recorded more than $9.3 billion invested in the region through 1000 direct deals by 155 impact investors that manage 203 active investment vehicles in the region. A few months earlier, GIIN had published the South Asia edition of the same report series, concluding that over $8.9 bn worth of investments has been deployed in South Asia since 2004. These are astonishing numbers that truly lend credibility to the impact investing sector as defined by GIIN. Another report by GIIN in collaboration with Cambridge Associates, Impact Investing Benchmark, concludes that in aggregate, impact investment funds launched between 1998 and 2004 have outperformed comparable conventional PE funds launched during that same time period.

The incredible achievements of this sector in such a short period of time are praiseworthy indeed, but also raise some questions around the definition of impact investing, how distinct are impact investors from mainstream investors, and whether impact investing has truly fulfilled its early promise.

Identity: who are we and how are we different from conventional investors?

While GIIN defines impact investors as those with the intent to make impact and who formally report their impact, Vineet believes that these two criteria are not robust enough to truly encompass what it means to be an impact investor. Intent, if not codified, is a metric that can never be tracked, and reporting of impact is currently being treated as an outsourcing job that simply counts the number of people being reached by an impact enterprise. 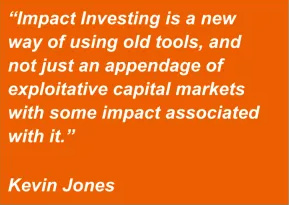 Both Kevin and Vineet articulated that impact investors must look beyond the GIIN definition to best understand and progress their role in the sector. For Vineet, impact investing was coined as a term to make a statement that is different from mainstream investing, and hence, the term must hold on to its distinction. Additionally, Vineet contended that impact investing’s differences from the mainstream goes beyond capital and includes a unique ecosystem, risk perception, innovation ability, and approach. He said, “If impact investing is not about anything distinct, why call it impact investing? Let us stay content with ‘investing’ as all acts of capital deployment create some impact somewhere.”

Agreeing in part with Vineet, Kevin emphasized the need for impact investing to distinguish itself from conventional venture capital. For him, though, impact investing is a movement that is about moral hunger to create a change. It uses capital and markets as means to achieve an end, always ensuring that financial returns are not the end in themselves. He says, “Impact investing is a new way of using old tools, and not just an appendage for exploitative capital markets with some impact associated with it.”

Accountability: how can we be held accountable for our claims on impact?

This explosive opening discussion segued into the next section: who is an impact investor accountable to? And how should she articulate her value addition to the act of investing?

Kevin believed the answer to this question lies in the distinction between impact investors and conventional venture capitalists: “You can use risk capital, but you need to use a different time line. The metric of venture capital is how fast you bring the money back – this is also a pirate’s metric. The metric of venture capital does not acquaint with impact. The internal rate of return does not help and does not fit with actually making a difference. The question is whether impact funds use the same metric; if they do, they play the same game.” Discussing the metric currently in vogue for measuring impact, Kevin opined that metrics like GIIRS and others fail to measure the value that the fund creates for enterprises: “GIIRS is a linear process of measuring impact. We need multidimensional indices and more complex metrics that show what impact investing is doing for the enterprises.”

Vineet also stressed on the need to assess the fund’s contribution: “The intent to impact is shared equally between the fund manager and the enterprise he invests in. As a fund manager, I am equally responsible for creating impact along with the entrepreneur.” Impact investing 2.0 is therefore about redefining capital efficiency: “The question is what you did with the capital. While jobs are as important as saving lives, value creation does not happen just by capital deployment.”

Vineet called upon impact investors to codify their fund’s intention and report their direct contribution. He added that the geography and sector, the innovativeness of the business model, and the pioneering role of the investor are all additional metrics for assessing the impact at an investor level, increasing accountability and advancing the articulation of impact. Vineet adds: “These metrics would make it difficult for the sector to mainstream, but without these specializations, the role of the sector would become irrelevant and redundant to current mainstream efforts.”

Vision: what kind of growth path do we envision for the impact investing sector?

The impact investing sector can celebrate the amount of capital that has been invested and the returns that some investors have been able to receive, but the question still remains: is this the ultimate goal of impact investing? Vineet reminisces that in the early days of impact investing, people believed impact would happen, but wondered if returns could be created alongside. However, “today, while it is clear that you can make returns, the question is whether you can really make impact.” And as a corollary, is this impact about large investments or about the quality of investments? A 2015 JP Morgan and GIIN Impact Investor Survey states that 91% of impact investments were in enterprises post venture stage; only 9% were in seed and start-up enterprises. This means that a large majority of these enterprises emerged unaided or supported by mainstream capital, questioning the legitimacy of the role of impact investors.

Equally startling is the fact that the majority of capital tagged as impact investments is not coming from new sources. The recent GIIN East Africa study states that $8 bn of the $9.3 bn impact investments made in East Africa were from Development Finance Institutions (DFIs). Of this, only a small part was invested through equity, following a venture approach and only 5% ($400 mn) involved deals below $5 mn. Most investments have been in deals of $50 mn and above, with the average deal size being $18 mn.

Is the impact investing sector focused on creating lasting value beyond large numbers and a catchy slogan? Defining and measuring impact investing, according to Kevin, must be with new paradigms and not traditional frameworks. Likewise, Vineet feels that the sector needs to fully understand the strengths and limitations of the current impact investing model before chasing scale. He added, “When capital comes from mainstream, its desire is to multiply itself in the shortest period of time. It strikes at the root of the intent which GIIN defines is key to making impact, and it converts the life of an individual, which we define as ‘impact’, into a statistic.”

So what is the Future?

Kevin sees the future of impact investing as a “movement that is led by people who know the people they are trying to help.” In his view, it is not the Harvard and MIT students who can develop solutions, but the local change makers that know what innovations are needed and understand the cultural context. For Vineet, the future lies in maturing the art of impact investing and striving to scale the sector patiently. Hype and big numbers are important, but they are not more important than the transformational change the sector is seeking to make. Personally, Vineet would like to move the needle of his own funds from merely taking high execution risk to investing in transformative, paradigm shifting ideas.