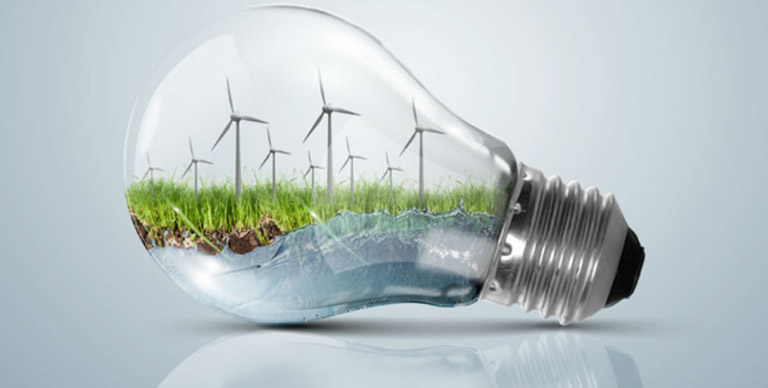 In past few years, India has achieved an impressive growth in adding renewable energy generation. Efforts have been made to alleviate the long standing problems like power shortages, rural electrifications, poor distribution companies (Discom) financial health and non performing energy assets through various policy interventions. However the current penetration of renewable energy is low about 15% of total energy supply. The energy supply spectrum largely entails coal (about 50%) followed by oil and gas. It is envisaged that in 2050, India will have an annual energy demand of about 14,500 TWh per year (with a moderate CAGR of 6.7% till 2050). Largely the demand will be from industry sector followed by transportation and buildings. In the absence of paradigm shift towards the low carbon alternatives, the dependence on fossil fuel will increase, causing a serious threat to nation’s energy security and GHG emissions in future.

With determined efforts by the policy makers, India can overcome barriers to enable investment in clean and sustainable energy supply options. In 2050, India will achieve reliable, economically competitive and environmentally sustainable electricity system, addressing the energy security and environmental strains. A couple of trends under current energy sector reforms are converging to create game-changing disruptions like electrification of large energy intensive sectors coupled with accelerated renewable energy capacity addition, parallel efforts to strengthen electricity supply to underserved and un-served through integration of grid and distributed renewable energy, adoption of emerging storage technologies to increase the grid appetite to accommodate intermittent sources and enabling cost optimization through the best use of automation and communication analytics.

Clean energy is India’s top priority to meet the global commitment under INDC (Intended Nationally Determined Contribution) to meet the target of reducing GDP emission intensity by 35%. The reduction is to be made by 2030 considering 2005 as a base data. With an aggressive chase of INDC targets on renewable energy capacity addition, India can have more than 50% of electricity generated from renewable source, leading the global renewable energy generation in 2050. India is eyeing towards massive electrification of its energy intensive sectors, the majority of which in 2050 will be seen to be supplied from renewable sources like solar and wind. Ongoing efforts towards greening the passenger & freight transportation by railways and an ambitious plan to electrify the entire road transportation by 2030, indicates that the second most energy intensive sector- Transportation is targeted. A mammoth pipeline is to be built in coming years to reach the target of 100GW by 2022.

In 2050, the renewable energy system in India will have large utility scale RE projects connected to central transmission grid to supply energy through Open Access to large industrial and commercial establishments. Some parts of it will be feed to state utilities to fulfill their Renewable Purchase Obligations. Under Green corridor programs, robust electricity grid with evacuators at high voltage levels will support the electrons fed from the large solar parks. On the other hand, a large number of consumers connected at low voltage will get supplied through distributed renewable energy like rooftop solar and mini grids.

While electricity generation is on track in India, the challenge lies in making the generated electricity/energy accessible to all. In a country of 1.3 billion people, more than 200 million people live without electricity including large parts of the rural population. Misleading definitions of electrification continue to cover up the grassroots situation of lack of enough power reaching real households. India needs to revamp its DRE policy to reduce the risks for private investors and encourage scale up.

A comprehensive reassessment across following three dimensions will reshape the integrated power supply scenario with DRE in India in future by 2050. Enablers like rational pricing, rapid technology cost reductions, increasing economies of scale, adoption of smart measures and more competitive supply chains are expected to make DRE penetration high in the integrated grid.

The need for storage will become critical with increasing RE penetration. Renewable energy rich countries are facing problems where excess supply of energy from intermittent sources on a day with reduced demand has led to negative pricing with formation of duck load curve. Globally energy storage has emerged as an unavoidable solution to smoothen the loads. In addition the storage supports in grid stabilization, peak shaving, improved capacity utilization, and improve generation efficiency. Battery market is evolving following the need of storage, witnessing efficiency improvements and cost reduction. Lead-acid batteries, which are the default technology for energy storage in developing countries, have significant technical challenges that limit their usability. Lithium ion battery technology as a better alternative has scaled commercially, with a cost reduction of 70% in last 2 years and further reductions are expected to continue going forward. Apart from batteries, molten or liquid salt; compressed air; pumped hydro; hydrogen are also identified as storage alternatives. India is currently lagging behind it global competitors in storage manufacturing space. By 2050, some of these technologies will be highly penetrated in India. Moreover, flywheel technologies (for automotive and rail transport), compressed air energy storage (CAES), super capacitors and superconducting magnetic electricity storage systems will also find wider applications in 2050.

India is assessing various storage alternatives to transform the transportation sector where lead-acid batteries are prevalent technology. Electric vehicle (EV) technology has rapidly evolved over the past five years and has witnessed dramatic decline in cost of about 65%. Low-cost models like Nissan Leaf, Chevy Volt, Tesla are making their ways to disrupt the automobile sector. USA and China having lion share of about 70% of EV market. India through its new EV policy has ambitious plans to completely electrify its automobile sector by 2030.

In 2050, India transportation network will be completely running on electric energy. India will have electric vehicles with a plug and play system where discharged batteries on lease/rent basis can be swapped with the recharged battery taking 2.5- 10 minutes for 4 wheel sedan to large buses. There will be charging stations also set up at concentrated areas such as shopping malls, cinema halls, restaurants.

To achieve this however, Government has to incentivize and provide tax breaks to support electric vehicles. On the other hand the penalties and capping will discourage diesel/petrol based combustion engines. The operational barriers also need to be assessed and addressed for example- setting up of large scale battery producing units, transportation of the batteries to the retail /service centres, local EV manufacturing capabilities and safety features which requires a critical analysis to avoid the EV policy to collapse.

Digitization has been the mantra for the new government, with several key interventions being introduced across sectors such as finance. However the deployment of these digital interventions are still at a nascent stage with only use cases of some technology such as smart meters visible in the market. Hence there is a need for creating an enabling regulatory & policy framework that will shape the future of the use of digitalization in India’s energy sector in 2050. With the digital disruption underway a few key technologies such as the Internet of Things (IoT), Artificial Intelligence & Blockchain are increasingly finding an application across key areas both on the grid as well as beyond it.

As the grid infrastructure itself develops to facilitate two ways energy flows, IoT is enabling the grid to communicate useful customer data leading to the evolution of next level use of smart metering. In 2050, communication channel will enable better grid management, operation as Artificial Intelligence enabled automation and real-time optimization reducing distribution losses. Application of Blockchain based smart ledgers & contracts in this regard will seems to be significant penetrated under distributed energy production & consumption and peer-to-peer energy trading.

In 2050, the key issue around access to energy will overcome through digitization as the power of production shifts from the energy supplier to the customer themselves, offering accurate metering, enabling a real-time energy market place where in the customers via smart contracts can set specific rates at which they seek to buy and sell their energy from the grid.

Sambit Nayak is leading the energy consulting and research practices at Intellecap. He is a clean energy professional with experience of delivering advisory assignments for about 10 years. He is an MBA in Power Management from National Power Training Institute and done engineering in computer science. He has worked on various energy, climate change and sustainability issues. He has served several corporates and governments, bilateral, multilateral agencies as clients.

Ankit Gupta works as a Senior Associate with the consulting and research practice at Intellecap and has worked on the projects that focus on inclusive growth in development countries of South Asia. He has worked extensively with the various small and medium enterprises, government and other stakeholders in the clean energy sector across strategy, operations, and implementation modules consisting of fund design and business case development.

Trideep Kumar Roy works as an Associate within the Consulting & Research practice at Intellecap and has worked on projects across India, Africa & South East Asia. His key focus areas include financial services, microfinance & the role of emerging technologies in inclusive growth in developing countries. He has over five years of experience working with a wide range of stakeholders including enterprises, regulators, investors & technical experts across customer research, product design, strategy, operations & process for business case development.