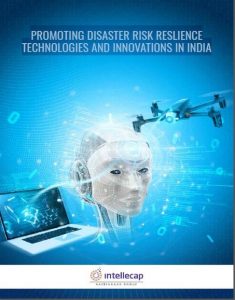 The increased frequency and intensity of disaster risks in recent years has led to huge social and economic losses, both in India and around the world. India, being a climate-sensitive nation, with a large vulnerable population, unplanned physical infrastructure development, and poor institutional capacity is worse affected by disaster-related impacts.

It is extremely important to promote the application of innovations and technology for Disaster Risk Resilience (DRR) aimed at improving the adaptive capacity of communities and reducing losses due to disaster-related impacts. Considerable efforts are being taken towards enhancing the role of technology in reducing vulnerabilities of communities and ecosystems-at-risk, preventing risks, and building the resilience of critical infrastructure.

In India, the Government, along with the private sector, has been widely using technologies such as Geographic Information System (GIS), weather forecasting and predictive analytics, early warning systems and remote sensing to identify risks and improve response to disasters. However, the spread and availability of disruptive technologies (such as artificial intelligence, blockchain, internet of things etc.) across disaster management scenarios (pre, during and post) vary amongst developed and developing nations. It is evident that an increased implementation of advanced technology for DRR will create new and improved methods which might enable evidence-based policies. The Government of India (GoI) recognizes that investment in DRR requires evidence-based risk management methods and effective application during emergencies.

This study thus aims to; (a) map the landscape of technologies that can be used in the DRR space, (b) define the current ecosystem, (c) examine the challenges, and (d) provide suggestions for promoting DRR technologies and innovations in India. We have prepared two version – one for the innovators and other for stakeholders who need to support the sector in India.