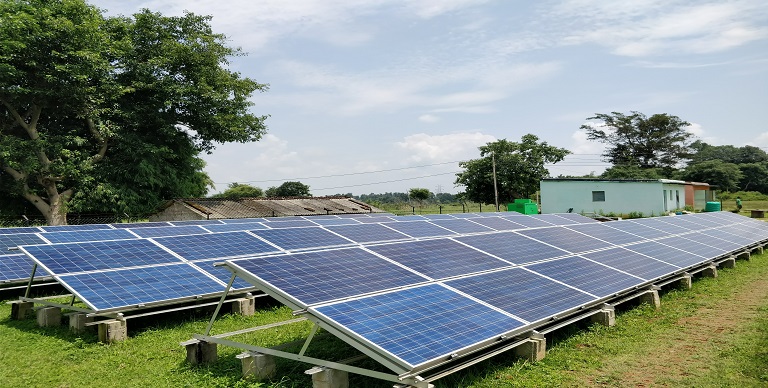 Outcome
Business process to identify and set-up high potential rural enterprises that can be powered by solar mini-grids.

Mlinda has been working actively in India since 2012 on financially viable, ready-to-deploy, open-source clean-energy projects that leverage solar energy. It has installed several pico and mini-grids across West Bengal & Jharkhand and aims to expand their operations expeditiously moving forward. Mini-grids are installed in villages and blocks which are located away from major cities and towns. These areas are primarily inhabited by agrarian communities, which are either not served or underserved by the national grid. Mini and micro grids are designed according to needs of a particular village or hamlet and hence can be set-up at a fraction of time and cost compared to a conventional grid. However, the average rural household power requirement is not sufficient to drive the utilization of the mini-grids. As a result, mini-grid developers are increasingly exploring and supporting the installation of productive loads in villages, which consume more energy and hence, can improve grid viability.
Intellecap undertook an engagement to strategically assist Mlinda on their expansion in Jharkhand by supporting the installation of sustainable productive loads. Intellecap, through an immersive interaction with the local community, district level nodal agencies, sector experts around Mlinda grid sites, developed a framework and ascertained that mini oilseeds and pulse processing units were the most suited to be set-up as productive loads in the region. Additionally, Intellecap also identified units which could be set-up to process crops that did not presently exist in the area but could be grown, such as aloe-vera, owing to the conducive agro-climatic conditions. As the next step, Intellecap identified the right set of partners which could help in setting-up operations through supplying input, finance, processing machines and catalyze sales through retail and distribution. Additionally, we helped build market intelligence by capturing consumer insights pertaining to pricing, taste, color, packaging and demand of the end product. Online retailers, both at national and local level were identified to be the leading partners to reach the market.

As a testimony to Intellecap’s work, Mlinda stated that: “The support we received helped us develop micro-businesses in our villages. This has resulted in increased economic development in the villages and greater utilization of energy leading to commercial viability of the mini-grids.”
In 2018, Mlinda commissioned five mini-grids till April, increasing capacity to a total of 13 mini-grids in Jharkhand.